Honestly, until recently, that headline would almost be damning with faint praise. Not anymore. While the Golden Age for comic books themselves may have long since passed, we are in the Golden Age for comic book movies. Nolan’s Batman, Rami’s Spider-Man, Singer’s X-Men have all boosted to new heights what was once a dying genre. Add Whedon’s Avengers to the list, quite possibly at the top of it.

Teenagers may not remember, but comic book movies were in trouble. Superman had become a cheesy spokesman against nuclear weapons and Batman had become a laughingstock on ice skates. The first two X-Men films helped to turn the tide, but even then there were some missteps. Ghost Rider, Elektra, Daredevil, Hulk (the first one) were Marvel misses. (Let’s ignore DC who still can’t find a successful and worthy movie franchise besides Batman.)

Then came Robert Downey Jr’s Iron Man with some fanbody Easter eggs and a throwaway post-credit scene with Samuel L. Jackson as Nick Fury. Had it not been a surprise box-office hit, none of it would have mattered. But it made $318 million in the US alone and Marvel had another hit on their hands. A sequel and three more leading superheroes were added, all with the intended purpose of building into something bigger – The Avengers, Marvel’s version of the Justice League, a team comprised of individual superheroes joining together for a greater cause.

How in the comic world do you bring together this many egos in one place – be it characters on the screen or actors and actresses in real life? You bring in a writer and director who knows the source material, has a reputation for excelling with ensemble casts and is quirky enough to pull it all off.

Make no mistake about it, The Avengers is a Joss Whedon movie. The lines, the quips, the sideways glares, the self-awareness, the pop-culture references. Yes, the title is officially Marvel’s The Avengers, but it would be more appropriate to say Joss Whedon’s The Avengers. If you aren’t familiar with Whedon or his work, go watch Buffy the Vampire Slayer, Firefly and Dollhouse TV series, Serenity the film and Dr. Horrible’s Sing-Along Blog the … whatever it is.

Whedon is able to pull off the unthinkable in The Avengers – give every major character a significant role, memorable lines and unforgettable scenes. The film works on every level. The beginning does play a bit slow, but that is understandable given you have to introduce (if not explain) every character and the last half of the movie is so frenetic that the earlier scenes needed to have enough down time to bring the audience into the Marvel world.

You know the plot. Everyone knows the plot. Crisis. Team comes together. Team tears apart. Crisis rises. Team comes together stronger. Team stops crises and defeats enemy. Despite it being obvious, Whedon is still able to make it fresh. Make you believe, maybe, just maybe, it doesn’t all turn out OK for the heroes in the end.

Of course, it is a summer blockbuster complete with grand fights and giant explosions in the middle of densely populated cities. At the same time, it is a ensemble film exploring the dynamics of a group thrown together in a crisis, learning about themselves and each other. It’s a spy thriller, an alien invasion flick, a slap-stick comedy and a deeper level contemplative piece all rolled, somehow, some way, into one movie … and it works – brilliantly.

The Avengers is absolutely the perfect comic movie, maintaining the balance between taking the source material seriously, but not treating it as Shakespeare. Despite having a similar trope of star actors and actresses, Batman & Robin flopped because it treated the comic world with a campy, dismissive attitude. Hulk tanked because Ang Lee thought he was still making Brokeback Mountain and went over the top with the angst and inner turmoil, forgetting that he was making a comic book movie.

Somehow, Whedon was able to go slap-stick without being campy, deep without dropping into pretentiousness. I left the theater still laughing about Hulk interrupting an evil monologue by repeatedly smashing the villain, while contemplating some of the film’s underlying themes concerning freedom, secrecy and human nature. Whedon made a movie and directed a film.

The last time I remember a theater audience as engaged as they were during The Avengers was Inception, when the gasp at the closing scene was deafening. During this film, there were so many moments when people laughed, clapped, cheered and simply expressed their approval and investment in the film and its characters.

Marvel and Whedon have theater-goers hooked. If nothing else, The Avengers has provided Whedon with an avenue to avenge all the doors in Hollywood that were shut to him previously. His Avengers is quite possibly the greatest comic book move ever. That’s no longer faint praise. That’s real significant praise. In fact, it could be said that The Avengers is a great move period, beyond the comic book qualifier. They’ve assembled into a record-breaking movie that is sure to continue the Golden Age of comic book movies, but it may have set the bar higher than any other comic movie is able to go.

If you’ve seen the film, you should enjoy this photoshop that popped in my head after one particularly memorable (and hilarious) playful punch between Hulk and Thor: 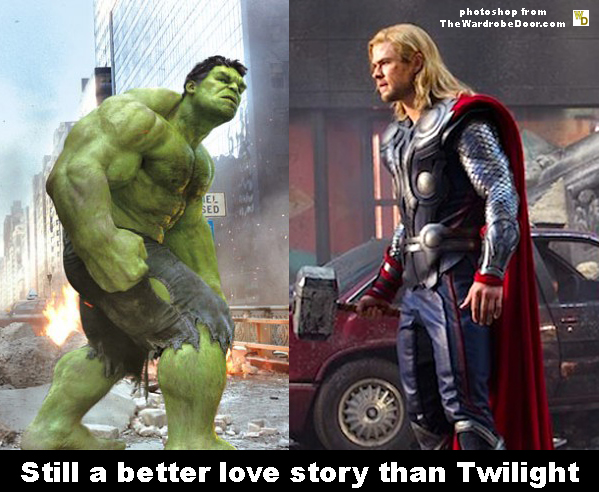 © Copyright 2014 – Aaron Earls. Design by HoweOriginal.
Follow Me On: